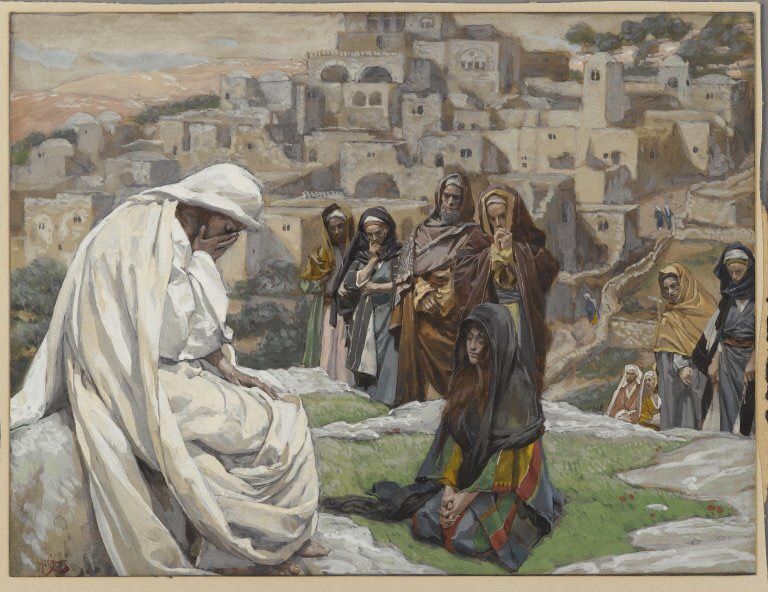 Hanging on His Words: The Passage

Tuesday, I double check our travel itinerary for this week’s spiritual jaunt together towards a sermon for the Tenth Sunday after Trinity and sigh. We’re headed quite a long way, well outside my comfort zone into rather unfamiliar territory. Ignore my grumbling.

We use a 1-Year lectionary–a well-worn churchly roadmap of readings, handed down by generations of Christians who traveled The Way before us. It takes us to some truly ‘must-see’ Biblical vistas. However, that ancient cartography guides us down roads we might rather avoid. Those old maps take preachers and people to places they otherwise might not go in the Scriptures.

The passages of Luke are often challenging for me. That Gospel puts me through my paces. Luke’s agile physician’s mind, attention to detail, and broad vocabulary makes me feel the distance and realize how painfully slow I must go. I stumble and fall behind him far more often than I care to admit. Luke, I know, is smarter than me. On the other hand, thanks to that I tend to learn a lot from him along the way. God help us, I pray, because I’m not sure where this one is going to end up.

Nonetheless, I set the spiritual GPS for Luke 19:41-48. So here we go, a first look through the passage:

41 And when [Jesus] drew near and saw the city, he wept over it, 42 saying, “Would that you, even you, had known on this day the things that make for peace! But now they are hidden from your eyes.

The city is Jerusalem, a most festive setting at this time. People are gathering for the Passover. This is what we Christians call “holy week.” The noisy, joyful reception as Jesus arrives on Palm Sunday in the verses just prior to this passage (Luke 19:28-40) falters and fades away. Suddenly, our Lord begins weeping. We’re aware, since Luke already told us, Jesus came here to die.

Pondering these matters in verses 41-42, word by word, I’m most struck by the optics. The Lord’s eyes “saw the city.” There are tears in his eyes as “he wept over it.” Jerusalem, their collective, figurative “eyes” cannot see the things Jesus sees, for “now they are hidden from your eyes.”

What hidden things do Christ’s eyes behold? What ignorant things does Jesus lament, because they remain unknown to this festive group gathered in the holy city for this sacred Passover week? Jesus weeps because they don’t know “the things that make for peace.”

Pausing to get my bearings a minute, I can’t help but wonder, “Do I even know what those are?” That phrase “the things that make for peace” seems important. I’ll have to go slow with that one, step by step. Gotta come back to it later. But for now, onward we go:

43 For the days will come upon you, when your enemies will set up a barricade around you and surround you and hem you in on every side 44 and tear you down to the ground, you and your children within you. And they will not leave one stone upon another in you, because you did not know the time of your visitation.”

We get not one glimpse of peace here! Nowhere peace! If there is any peace here, it’s completely hidden, obscured by this chaos of conflict and war. Yet, Jerusalem doesn’t see cause for Jesus’s weeping. They don’t see even the need, let alone the very “things that make for peace.”

Christ preaches here like the prophets of old. He weeps like Jeremiah over the impending destruction of his city, Jerusalem. It’s going to happen. The Lord sees it plain as day, as he looks over the festive crowd. They’ve come on pilgrimage from all around to celebrate this Passover.

Jesus speaks of the future. The verbs, they’re all future tense terms in Luke’s Greek: these days “will come;” enemies “will set up” barricades; they will “surround” and will “hem” you in on every side. Enemies will “tear you down to the ground…will not leave one stone on another.” 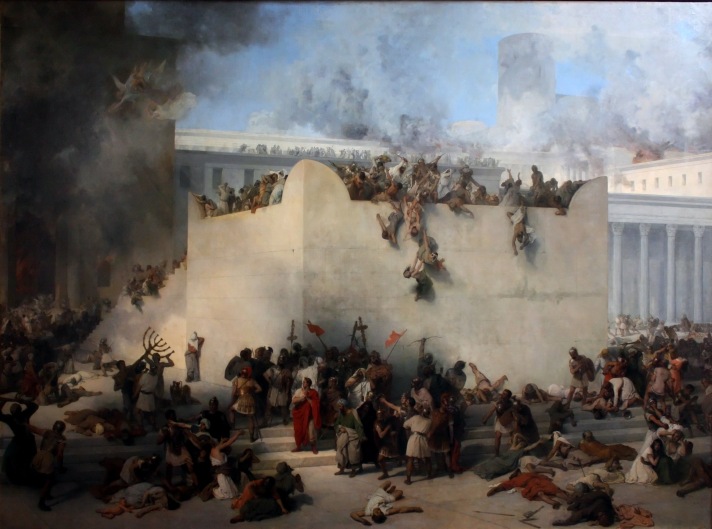 Does not Jesus weep because all this were averted if they only had seen, would “have known the things that make for peace?” Verse 44 ends by saying, “because you did not know the time of your visitation.” The phrase “not know” here makes the link. Verse 42 and 44 look like twin bookends facing opposite on a shelf of grizzly war stories. That’s going to be important to remember, that “the time of your visitation” connects with “the things that make for peace.” Perhaps they are one and the same thing? Gonna have to revisit that, too.

Curious note: the word translated “visitation.” In Luke’s Greek (ἐπισκοπῆς), at first glance, that looks like a Biblical word generally reserved for ordained clergy. I’m reminded, for example, when Luke used that related word (ἐπισκόπους) in Acts. (20:28) There St. Paul encourages the Ephesian elders, “Pay careful attention to yourselves and to all the flock, in which the Holy Spirit has made you overseers, to care for the church of God, which he obtained with his own blood.” (ESV) If the fonts of those two Greek words in parenthesis here are coming through, you can see the common letters; the words are very closely related.

This “visitation” that Jesus describes means much more than a mere neighbor dropping by your house. Jesus says an official visit took place from one who bears office as an official Visitor. I remember offhand a study of the word “parousia” (e.g. 1 Thess. 4:15 ‘the coming of the Lord’) from my seminary classes on Matthew and 1 & 2 Thessalonians. In the Bible, ‘parousia’ is also a closely connected important, imminent “arrival” term of an official’s royal visit, though it’s not used in our Gospel lesson. My mind wanders a bit, mediating on the crucial role visitation plays in pastoral ministry. Visitation is essential to the very nature and meaning of the Pastors’ vocation. But I digress… Next we find:

45 And he entered the temple and began to drive out those who sold, 46 saying to them, “It is written, ‘My house shall be a house of prayer,’ but you have made it a den of robbers.”

From tears over tomorrow’s distant enemies, Jesus comes to the temple to drive out a “den of thieves” (KJV) now defiling His “house of prayer.” Again, a link with Jeremiah. Checking the lectionary, I note an alternative Old Testament text is sometimes used, Jeremiah 7:1-11 which Jesus quoted above saying, “it is written…”

All four Gospels record Jesus “cleansing the temple.” Matthew (21:12-13) has a very similar two verses. Mark (11:15-18) expands on this with a few more details. John seems to record it (or a very similar event?) much earlier than our ‘holy week,’ in the second chapter of his record of Jesus’ life and ministry (John 2:13-22). These similarities and differences might be interesting to discuss in Bible Class, but likely won’t make it to the sermon.

The final detail to catch my eye here is the word “robbers.” I’ve run across that word most often in the accounts of the Crucifixion. In Matthew 27 and Mark 15, Jesus is led away and crucified between two “robbers,” the same word Luke uses here. Interestingly enough, Luke doesn’t use that Greek word “robbers” in his account of the Crucifixion, but has a different Greek word which the ESV translates “criminals.” We do run across robbers elsewhere in Luke. In the parable of the Good Samaritan (Luke 10:30-37), Jesus describes a “man who fell among the robbers.” 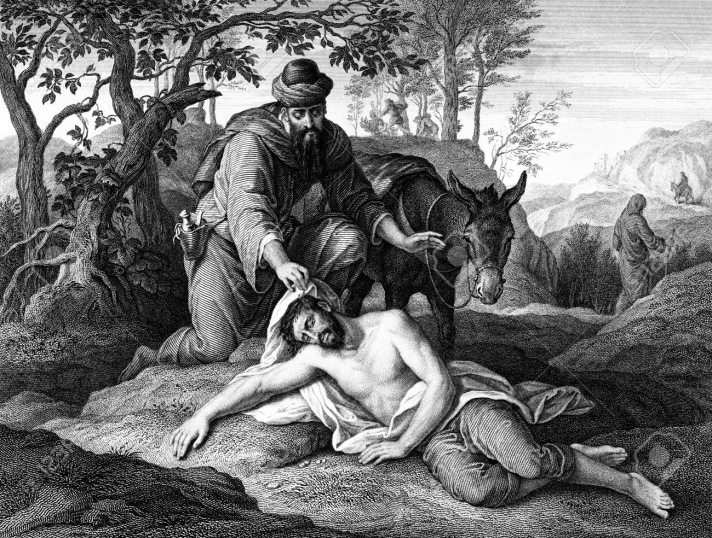 We Lutherans eagerly “preach Christ crucified.” (1 Corinthians 1:23) Like St. Paul, we hope “to know nothing among you except Jesus Christ and him crucified.” (2:2) Despite our zeal to preach the cross, it may be worth pausing to consider why Luke’s vocabulary here connects “robbers” more closely with the Good Samaritan than the Crucifixion?

Plainly Luke knows the term “robbers.” Luke tells us he even researched other accounts of Christ’s life, perhaps knows Matthew and/or Mark used that “robbers” word for the Crucifixion. Luke’s language just isn’t as casual or informal as most New Testament books. Remember my apprehensive sigh in the very first paragraph above?! Besides that, the Holy Spirit is involved here to teach us not only general Gospel-ish truths, but reveals particular things from God too, we believe!

But looking back to the passage at hand, we’re almost through:

47 And he was teaching daily in the temple. The chief priests and the scribes and the principal men of the people were seeking to destroy him, 48 but they did not find anything they could do, for all the people were hanging on his words.

Embarrassingly enough, I stumbled… Actually, I stumbled a month or so ago when I looked over the upcoming lessons for the week and planned to preach on the theme, “Hanging on His Words,” from this final verse. That’s a fine way to say it in English, but the Greek here doesn’t have either of the usual terms translated “words.” Luke literally says “the things being heard.” Of course, he means the people heard Jesus’ “words,” don’t get me wrong.

Yet Luke focuses on the orality of Christ’s preaching and teaching–the public nature of his speech being heard and believed by “all the people.” His daily teaching was received in such a way that the chief priests, scribes and authorities couldn’t find anything to do about it, not without risking the disfavor of the crowd. Jesus was being heard. The crowds listened in some agreement with “the things being heard,” the words Jesus speaks.

And this “hanging upon” verb, it’s a one-of-a-kind Greek term used nowhere else in the Bible. Already, we’ve run across others in verses earlier in this passage. Luke made me use my Greek dictionary today, so many words I’d not known. Even though this is translated and put pretty well into our English, my target theme turned out to be a little ironic. I’m going to have to rethink about what it means to be a hearer of Jesus, a follower “Hanging on His Words” in the temple with God’s people.

See you all in a few days! And feel free to share your thoughts here or on the Isaiah 50:4 Blues Facebook page.

3 thoughts on “Hanging on His Words: The Passage”