Hanging on His Words: Perspective 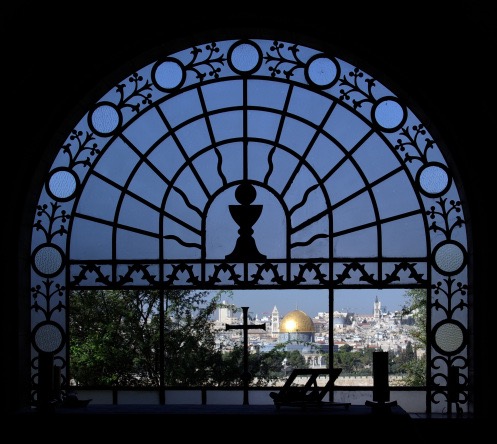 Dominus Flevit, “The Lord Wept,” so the Franciscan friars name the chapel above, now overlooking Jerusalem. Not that I’ve been to this place. Whether Jesus actually paused on that very spot or some other nearby, I delight in the design of this chapel’s window. One looks at Jerusalem below through the cross, through the chalice and host of the Sacrament established by Jesus during that Passover.

When Jesus visited Jerusalem in Luke 19:41-48, he came to die on the cross. His visitation, Luke shows us, is God’s visitation for the redemption of His people. The Passover setting recalled the death of the firstborn of Egypt in God’s deliverance of His people Israel from slavery and bondage. God visited His people then to deliver them, keeping His Covenant promise of old.

“Blessed is the Lord God of Israel, For He has visited and redeemed His people…To give knowledge of salvation to His people By the remission of their sins, Through the tender mercy of our God, With which the Dayspring from on high has visited us; To give light to those who sit in darkness and the shadow of death, To guide our feet into the way of peace.” (Luke 1:68, 77-79)

And again, when Jesus resurrected a widow’s son outside Nain:

“Then fear came upon all, and they glorified God, saying, “A great prophet has risen up among us”; and, “God has visited His people.” (Luke 7:16)

Luke’s “Prophet Christology” permeates our passage, that God Himself is present to visit His people in Christ, speaking His Word and fulfilling His Word for their salvation. The quotation and links with Jeremiah’s own lamentation over Jerusalem, these we noted the other day. The Prophet Christology continues throughout the book, even after the Crucifixion and Resurrection. Jesus appears to the disciples on the road to Emmaus:

And [Jesus] said to them, “What things?” So they said to Him, “The things concerning Jesus of Nazareth, who was a Prophet mighty in deed and word before God and all the people, and how the chief priests and our rulers delivered Him to be condemned to death, and crucified Him. But we were hoping that it was He who was going to redeem Israel. Indeed, besides all this, today is the third day since these things happened. Yes, and certain women of our company, who arrived at the tomb early, astonished us. When they did not find His body, they came saying that they had also seen a vision of angels who said He was alive. And certain of those who were with us went to the tomb and found it just as the women had said; but Him they did not see.”

Then He said to them, “O foolish ones, and slow of heart to believe in all that the prophets have spoken! Ought not the Christ to have suffered these things and to enter into His glory?” And beginning at Moses and all the Prophets, He expounded to them in all the Scriptures the things concerning Himself. (Luke 24:19-27)

So Jesus proceeds as God’s prophet Son to the temple, there to drive out the “den of robbers.” Lenski offered a helpful observation on that point. A den of robbers is the place where they feel safe to plan and conduct their nefarious business, uninterrupted and undetected, secure from any threat of punishishment or consequence. This “den of robbers” had been established in God’s”house of prayer.”

With God’s visitation in Christ, sinners can no longer feel safe to conspire and exploit His redeemed. None ought visit His “house of prayer” while presuming they are finding His house abandoned, forsaken by God–and themselves free to continue their exploitative, blasphemous pursuits. God has come in Christ that His Word may daily be taught and made known. They were hearing God speak that Word for Himself, making “the things that make for peace,” His way of peace known.

God’s Visitation continues in the apostolic ministry in Acts. I’d noticed the link with Luke’s “visitation” word in Acts 20:28 “the Holy Spirit has made you overseers [official visitors]” the other day. Dr. Just draws attention to this, noting further in his excellent commentary on Luke that same word used for the office vacated by Judas’ death, “Let another take his [visitation] office.” (Acts 1:20) Dr. Just really develops and brings out St. Luke’s “hearers of the Word” catechetical theme.

God visits His people. God speaks and is heard. The people were “hanging on his words,” literally the “being heard things” from their visiting Lord. I think, too, about the promise pronounced by Jesus’s words as he sends apostles to visit and preach in Luke 10:

Plenty of food for thought as I plan for tomorrow’s sermon. God be with us all until then…

2 thoughts on “Hanging on His Words: Perspective”