Readings for the Eleventh Sunday after Trinity (09.01.19)

We pray: “Almighty and everlasting God, always more ready to hear than we to pray and to give more than we either desire or deserve, pour down upon us the abundance of Your mercy, forgiving those things of which our conscience is afraid and giving us those good things of which we are not worthy to ask, except through the merits and meditation of Christ, our Lord, Who lives and reigns with You and the Holy Spirit, one God, now and forever.” Amen.

4:1 Now Adam knew Eve his wife, and she conceived and bore Cain, saying, “I have gotten a man with the help of the Lord.” 2 And again, she bore his brother Abel. Now Abel was a keeper of sheep, and Cain a worker of the ground. 3 In the course of time Cain brought to the Lord an offering of the fruit of the ground, 4 and Abel also brought of the firstborn of his flock and of their fat portions. And the Lord had regard for Abel and his offering, 5 but for Cain and his offering he had no regard. So Cain was very angry, and his face fell. 6 The Lord said to Cain, “Why are you angry, and why has your face fallen? 7 If you do well, will you not be accepted? And if you do not do well, sin is crouching at the door. Its desire is contrary to you, but you must rule over it.”

8 Cain spoke to Abel his brother. And when they were in the field, Cain rose up against his brother Abel and killed him. 9 Then the Lord said to Cain, “Where is Abel your brother?” He said, “I do not know; am I my brother’s keeper?” 10 And the Lord said, “What have you done? The voice of your brother’s blood is crying to me from the ground. 11 And now you are cursed from the ground, which has opened its mouth to receive your brother’s blood from your hand. 12 When you work the ground, it shall no longer yield to you its strength. You shall be a fugitive and a wanderer on the earth.” 13 Cain said to the Lord, “My punishment is greater than I can bear. 14 Behold, you have driven me today away from the ground, and from your face I shall be hidden. I shall be a fugitive and a wanderer on the earth, and whoever finds me will kill me.” 15 Then the Lord said to him, “Not so! If anyone kills Cain, vengeance shall be taken on him sevenfold.” And the Lord put a mark on Cain, lest any who found him should attack him.

2:1 And you were dead in the trespasses and sins 2 in which you once walked, following the course of this world, following the prince of the power of the air, the spirit that is now at work in the sons of disobedience— 3 among whom we all once lived in the passions of our flesh, carrying out the desires of the body and the mind, and were by nature children of wrath, like the rest of mankind. 4 But God, being rich in mercy, because of the great love with which he loved us, 5 even when we were dead in our trespasses, made us alive together with Christ—by grace you have been saved— 6 and raised us up with him and seated us with him in the heavenly places in Christ Jesus, 7 so that in the coming ages he might show the immeasurable riches of his grace in kindness toward us in Christ Jesus. 8 For by grace you have been saved through faith. And this is not your own doing; it is the gift of God, 9 not a result of works, so that no one may boast. 10 For we are his workmanship, created in Christ Jesus for good works, which God prepared beforehand, that we should walk in them. 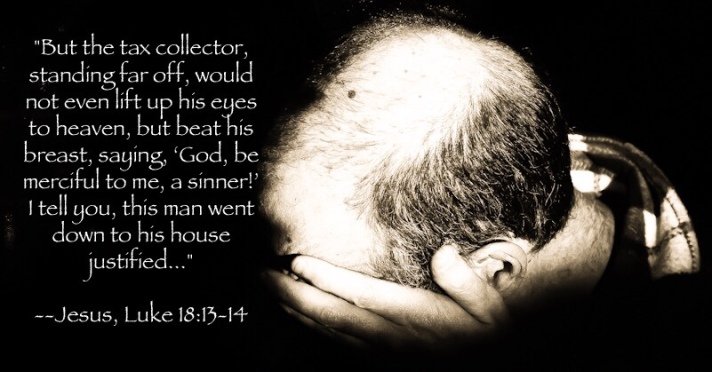 9 He also told this parable to some who trusted in themselves that they were righteous, and treated others with contempt: 10 “Two men went up into the temple to pray, one a Pharisee and the other a tax collector. 11 The Pharisee, standing by himself, prayed thus: ‘God, I thank you that I am not like other men, extortioners, unjust, adulterers, or even like this tax collector. 12 I fast twice a week; I give tithes of all that I get.’ 13 But the tax collector, standing far off, would not even lift up his eyes to heaven, but beat his breast, saying, ‘God, be merciful to me, a sinner!’ 14 I tell you, this man went down to his house justified, rather than the other. For everyone who exalts himself will be humbled, but the one who humbles himself will be exalted.”

One thought on “Readings for the Eleventh Sunday after Trinity (09.01.19)”