Is it wrong to be concerned for my neighbor’s spiritual wellness? How dare you or I care and offer some help? 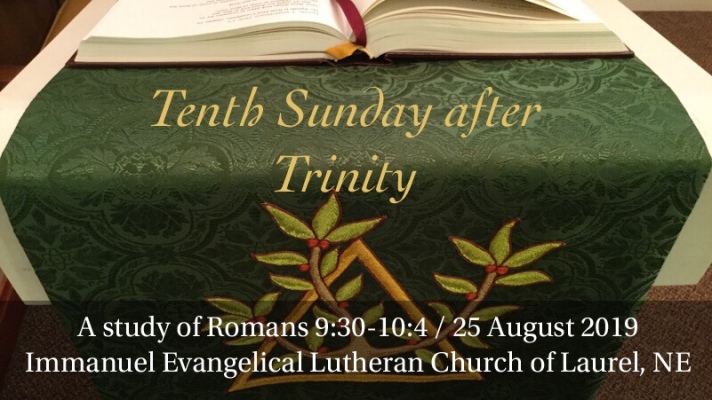 9:30 What shall we say, then? That Gentiles who did not pursue righteousness have attained it, that is, a righteousness that is by faith; 31 but that Israel who pursued a law that would lead to righteousness did not succeed in reaching that law. 32 Why? Because they did not pursue it by faith, but as if it were based on works. They have stumbled over the stumbling stone, 33 as it is written,

“Behold, I am laying in Zion a stone of stumbling, and a rock of offense;
and whoever believes in him will not be put to shame.”

10:1 Brothers, my heart’s desire and prayer to God for them is that they may be saved. 2 For I bear them witness that they have a zeal for God, but not according to knowledge. 3 For, being ignorant of the righteousness of God, and seeking to establish their own, they did not submit to God’s righteousness. 4 For Christ is the end of the law for righteousness to everyone who believes.

We begin with member asking, “What exactly is the glory of God”? Briefly we engage in an off-the-cuff exploration of Hebrew roots and various uses common in Scripture.

A summary of the first 8 chapters of Romans is offered to introduce our passage, the context and journey toward the question of covenant Law and the Gospel of being justified (declared righteous before God) by grace through faith alone.

Our passage from the end of Romans 9 and starting Romans 10 presents us with an unpopular, but necessary question:

Is it proper to be concerned about the spiritual well-being of your neighbor?

Is it morally right to tell non-Christians that Jesus died on the cross for their sins? Even Jewish people? Even those of Islamic faith? What of those with non-Abrahamic religion or none at all?

Cries of imperialism, colonialism, bigotry and accusations of hate are heaped upon those who persist in proclaiming that Jesus is the Way, the Truth, and the Life–and no one comes to the Father but by him.

Socially unacceptable and growing quite uncommon among many contemporary American Christian churches, the mission of the God remains making “disciples of all nations, baptizing…and teaching them all things,” proclaiming Christ and Him crucified, as Paul says here and likewise in 1 Cor. 1:

21 For since, in the wisdom of God, the world did not know God through wisdom, it pleased God through the folly of what we preach to save those who believe. 22 For Jews demand signs and Greeks seek wisdom, 23 but we preach Christ crucified, a stumbling block to Jews and folly to Gentiles, 24 but to those who are called, both Jews and Greeks, Christ the power of God and the wisdom of God.

All this sets the stage for the sermon today, embracing the righteousness of God by grace, through faith Christ; He “is the end of the Law for everyone who believes.”