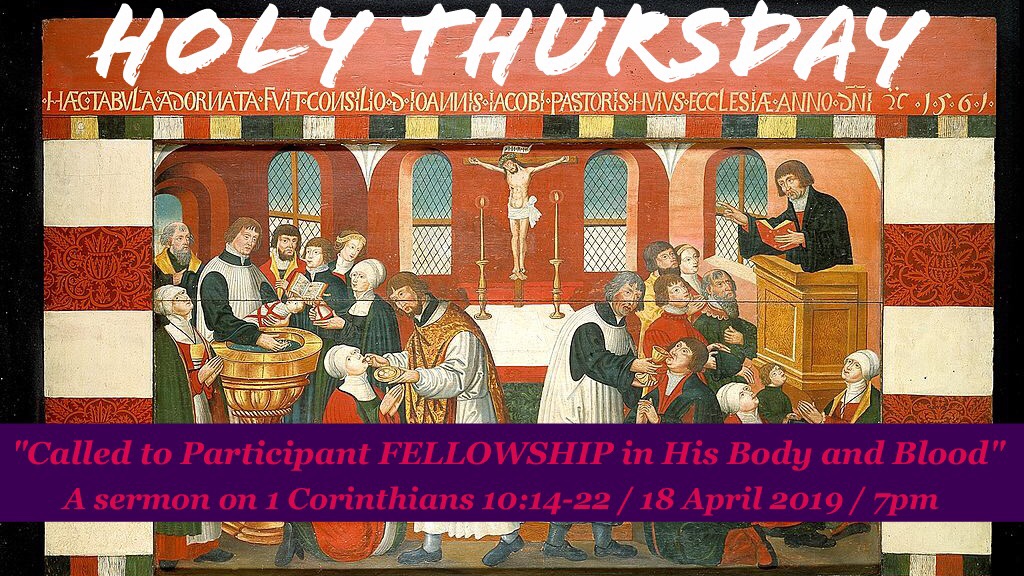 Called to Participant Fellowship in His Body and Blood

So why this urgent plea to FLEE from idolatry to the Lord’s table? 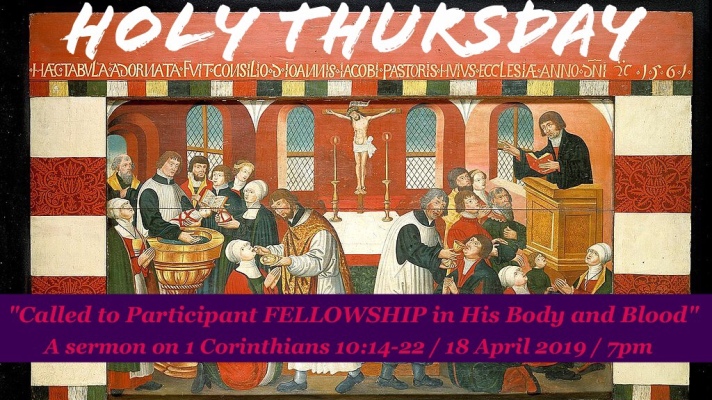 14 Therefore, my beloved, flee from idolatry. 15 I speak as to sensible people; judge for yourselves what I say. 16 The cup of blessing that we bless, is it not a participation in the blood of Christ? The bread that we break, is it not a participation in the body of Christ? 17 Because there is one bread, we who are many are one body, for we all partake of the one bread. 18 Consider the people of Israel: are not those who eat the sacrifices participants in the altar? 19 What do I imply then? That food offered to idols is anything, or that an idol is anything? 20 No, I imply that what pagans sacrifice they offer to demons and not to God. I do not want you to be participants with demons. 21 You cannot drink the cup of the Lord and the cup of demons. You cannot partake of the table of the Lord and the table of demons. 22 Shall we provoke the Lord to jealousy? Are we stronger than he?

PART ONE: Flee From Idolatry

At first glance, we might wonder what Paul’s urgent command to “Flee from idolatry” has to do with our Lord’s Supper? What might fleeing possibly have to do with this eating and drinking? Perhaps it strikes us as strange, mostly because we don’t learn from childhood like Paul did, to think like the Lord teaches His Covenant people to think in the Scriptures.

We Gentiles, like the Corinthians, don’t tend to look at the world as the Lord teaches us to view idolatry. We know it’s wrong, but is it dangerous and life-threatening, even demonic?! We don’t tend to consider it that way. “To each his own,” we think, “whatever floats your boat. It’s all good.”

Somewhat like ancient Corinth, our culture values and teaches us to value equality, diversity, and pluralism–even in spiritual matters. All religions should be equally free. Every person should be free to express and practice his or her faith on his or her own terms. And most of us have never really known a day where other people didn’t worship other gods, or teach very differently about our Lord Jesus Christ than we teach and believe.

So it was in Corinth, where many felt equally comfortable and entitled to worship most anywhere they wanted. Doctor Gregory Lockwood reports there is archeological evidence in ancient Corinth of “sanctuaries and statues honoring Apollo,’Black Aphrodite,’ Athena, Zeus, Poseidon (Neptune)…Dionysus, the Egyptian gods Isis and Serapis…and last but not least, the imperial cult,” that is, the worship of the Roman emperor. (Concordia Commentary on 1 Corinthians, p.6) Their families and friends likely often participated. That was normal to them. Outwardly, the people of Corinth were as promiscuous with their souls as they were known to be with their bodies. Exclusivity and fidelity, whether to their spouse or to their gods, was not highly valued.

So here Paul tells them in no uncertain terms: “Flee from idolatry.” even as he said in 1 Cor. 6 “Flee from sexual immorality.” (6:18) He was dealing with the idolatry matter earlier in 1 Corinthians 10 as the Hebrews fell victim, and goes on to explain this farther along in our passage. While idols themselves are nothing but wood and stone, behind them act demonic forces who are directly opposed to our one Lord Jesus Christ.

Elsewhere, Paul warns that even among Christians, there is danger to be found: “And what I am doing I will continue to do, in order to undermine the claim of those who would like to claim that in their boasted mission they work on the same terms as we do. For such men are false apostles, deceitful workmen, disguising themselves as apostles of Christ. And no wonder, for even Satan disguises himself as an angel of light. So it is no surprise if his servants, also, disguise themselves as servants of righteousness. Their end will correspond to their deeds.” (2 Cor. 11:12-15)

Other apostles give similar warnings. St. John writes, “Beloved, do not believe every spirit, but test the spirits to see whether they are from God, for many false prophets have gone out into the world…They are from the world; therefore they speak from the world, and the world listens to them.” (1 John 4:1-5)

And again St. John says, “For many deceivers have gone out into the world, those who do not confess the coming of Jesus Christ in the flesh. Such a one is the deceiver and the antichrist. Watch yourselves, so that you may not lose what we have worked for, but may win a full reward. Everyone who goes on ahead and does not abide in the teaching of Christ, does not have God. Whoever abides in the teaching has both the Father and the Son.” (2 John 1:7-9)

Jude writes, “Beloved, although I was very eager to write to you about our common salvation, I found it necessary to write appealing to you to contend for the faith that was once for all delivered to the saints. For certain people have crept in unnoticed who long ago were designated for this condemnation, ungodly people, who pervert the grace of our God into sensuality and deny our only Master and Lord, Jesus Christ.” (Jude 1:3-4)

PART TWO: Flee from the Demonic unto Christ

The Gospel sets before us no other Jesus than the one opposed to demons, and against Whom the demons stand opposed. “And he healed many who were sick with various diseases, and cast out many demons. And he would not permit the demons to speak, because they knew him.” (Mark 1:34)

As Jesus concludes the Sermon on the Mount, he warns, “Not everyone who says to me, ‘Lord, Lord,’ will enter the kingdom of heaven, but the one who does the will of my Father who is in heaven. On that day many will say to me, ‘Lord, Lord, did we not prophesy in your name, and cast out demons in your name, and do many mighty works in your name?’ And then will I declare to them, ‘I never knew you; depart from me, you workers of lawlessness.’” (Matthew 7:21-23)

Those who would take issue with Paul, John, or Jude–calling them archaic, foolish and superstitious in all their talk about false brothers, evil spirits and demons–these must find themselves equally opposed soon enough to the living Lord Jesus Christ. Jesus choose them as apostles and sent them out to preach and to teach such things. God forbid that you or I should be found among the great number of those who want nothing to do with this Jesus, who would make such an exclusive claim to our faith and our love.

Paul bids them not just to run away from idolatry, but to flee to where Jesus is present and found. Against this urgent threat of hell’s minions, Paul proclaims your place in Heaven’s kingdom and your true communion with Heaven’s own King.

Greater than the demons and those unwittingly participants with them, your Lord Jesus Christ bids you partake of the cup of blessing which we bless. It is a very real participation in the blood of Christ.

The demons are present as idolaters participate with them toward evil ends. (Deut. 32:16-21) Yet even more truly do Christians participate exclusively as our Lord Jesus commands, “Take and drink, this cup is the New Testament in my blood, shed for you for the forgiveness of your sins.”

What fellowship has Christ with Belial? None! Jesus must cast him out and far away from all participation and influence in you. He bids you, “Take and eat, this is my body given for you.” It was given to purchase and redeem you “from all sin, from death and the power of the devil.” (Small Catechism, Second Article of the Creed) You participate in no absent Christ, a Lord far removed from your life. Here He is found as close as your lips! Thus the living Lord enters in by way of “this bread that we break” and “this cup of blessing which we bless.” He preserves you in this way against “every evil of body and soul“ (Seventh Petition), to give life to your mortal bodies by His body and His blood. Jesus Christ has come in the flesh, even here, even now, for you! So faith grasps these words, “given and shed for you, for the forgiveness of sins.”

Jesus has “come into the world to save sinners,“ (1 Tim. 1:12-15) including secret idolaters and open ones. He comes to rescue them from death and the Devil and give eternal salvation to all who believe be this. “Flee from idolatry,” but come to the Lord’s table, right into the safety of His bodily presence here in your life. Here sin may not rule over you, but rather you are cleansed of it. You are called into participant fellowship in His Body and Blood. Unseen to the eyes, yet faith finds a very real and present help, our Deliverer, Savior and Lord awaits. Welcome to the Lord’s table, and participation in everything He is and offers, for you–here and now. Amen.