As the congregation celebrates the confirmation of our young ones in the Christian faith, we hear about this same Church brought forth on the day of Pentecost. The apostolic Word is preached. The people of faith are gathered by the Sacraments. As part of the Fellowship in His Word Series, join in as we learn from the Lord’s apostles about His holy Christian church, both then and now in Acts 2:36-47. 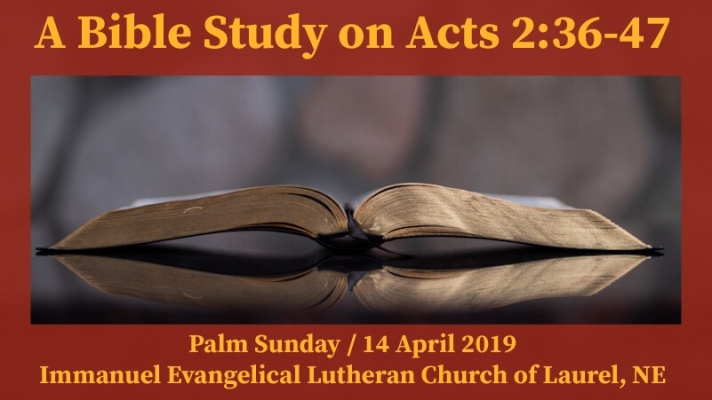 36 Let all the house of Israel therefore know for certain that God has made him both Lord and Christ, this Jesus whom you crucified.”

37 Now when they heard this they were cut to the heart, and said to Peter and the rest of the apostles, “Brothers, what shall we do?” 38 And Peter said to them, “Repent and be baptized every one of you in the name of Jesus Christ for the forgiveness of your sins, and you will receive the gift of the Holy Spirit. 39 For the promise is for you and for your children and for all who are far off, everyone whom the Lord our God calls to himself.” 40 And with many other words he bore witness and continued to exhort them, saying, “Save yourselves from this crooked generation.” 41 So those who received his word were baptized, and there were added that day about three thousand souls.

42 And they devoted themselves to the apostles’ teaching and the fellowship, to the breaking of bread and the prayers. 43 And awe came upon every soul, and many wonders and signs were being done through the apostles. 44 And all who believed were together and had all things in common. 45 And they were selling their possessions and belongings and distributing the proceeds to all, as any had need. 46 And day by day, attending the temple together and breaking bread in their homes, they received their food with glad and generous hearts, 47 praising God and having favor with all the people. And the Lord added to their number day by day those who were being saved.

The Day in our passage is Pentecost. With the sound of a great wind, the Holy Spirit draws people from many nations to one location. A visible sign accompanies the audible Word as the Apostles preach. A single flame divides and tongues of that flame came to rest upon fishermen, tax collectors, and other mere men. Just as He promised, our one Lord sends His one Spirit to proclaim the “one, holy, Christian and apostolic” faith (Nicene Creed). Each present hears the same Gospel in his own language—the tower of Babel is undone, as this one Spirit brings to repentance “about three thousand souls!”

Through the centuries, the Holy Spirit continually “calls, gathers, enlightens and sanctifies the whole Christian church on earth and keeps it with Jesus Christ in the one true faith” (Luther’s Small Catechism, Third Article of the Apostles’ Creed). Flames of fire confirmed the apostles’ unique office and ministry. The word they preach and teach is the very word of Christ who appointed and sent them. Our passage in Acts 2 describes not only what the Church used to be like, but shows and proclaims what the fellowship of the baptized is like even now and ever shall be.

PART ONE: “Both Lord and Christ, this Jesus…”

A.) Verse 36 shows the last line from Peter’s Pentecost sermon. Consider the words, “therefore know for certain.” What is the opposite of “certain”?

B.) Can Christians rightly claim and possess true knowledge of Jesus with “certainty,” through faith in the apostolic preaching and teaching? Why or why not?

PART TWO: “Brothers, What shall we do?”

C.) “When they heard this, they were cut to the heart…” (v.37). This sounds uncomfortable, at the very least. When the crowds heard Peter’s sermon, do we find them upset about how shamefully the high priest and others associated with the temple treated Jesus, angered at the injustice of the Roman government, or lamenting their own part and guilt before God? Explain your answer:

D.) What words from verse 38 show that each person must individually receive the help appointed by the Lord?

E.) The preaching of the Law of God shows us our sins. The Law doesn’t only accuse, but it does always accuse one of not acting perfectly enough, with pure enough intentions or actions to please the Lord and set things right with Him by our own efforts. By showing that their sin led to the death of Jesus, why could they not fix that?

F.) Even the preaching of Jesus’s resurrection also robs them of any credit in correcting the guilt and damage of sin by their own efforts. They couldn’t make things right, even if they had the good intention or power to do so. It is Finished! God already raised Jesus from the dead. But this preaching of repentance and Baptism is not a preaching of the Law, bringing guilt. Rather it is a preaching of God’s Promise. Who is this promise of Baptism for? (Verse 39)

G.) Our ESV translates the Greek of verse 40 as “save yourselves.” Other translations, such as the NASB, put this Greek word into our English language by saying “be saved from this perverse generation.” Read verses 38-41 together. Write down the many other passive verbs (an action being done to you through another) which you can find in close context:

PART THREE: “THEY DEVOTED THEMSELVES”

H.) Like these other words, “they devoted themselves” can also accurately be put into our language by saying “they were being devoted,” wherein God is the main actor working and bringing forth such devotion in our hearts.

The Law doesn’t only accuse, but it always accuses: it shows us our sin and failure to do what God commands. The Gospel, on the other hand, shows us our Savior and what He has done and now does to deliver us. Of the two ways to translate this “devoted” word, write LAW next to the one which points people to actions they must perform, something they must do. Write GOSPEL next to the one which points us to action the Lord takes, what the Lord does for us:

I.) In verse 42, we find one action happening (“devoted”), but four objects or aspects of that devotion. What four things were early Christians devoting themselves / being devoted to:

J.) What becomes of the Lord’s Church if we leave out the first one, “the apostles’ teaching”?

K.) What becomes of the Lord’s Church when we leave out the second, “the fellowship”?

L.) What becomes of the Lord’s Church should we omit the third, “the breaking of the bread”?

M.) What becomes of the Lord’s Church in forsaking the fourth, “the prayers”?