The Mistress of The House: The Passage 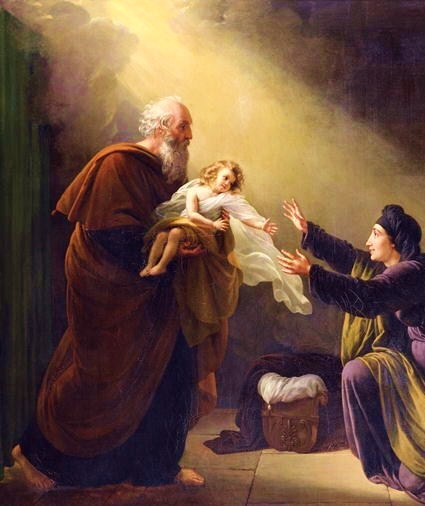 To Zarephath! With Elijah, we follow along as this week’s Old Testament reading from 1 Kings 17:17-24 leads us to the home of a widow. She rules over her household there, in obedient service to the Lord and direct support of his prophet’s life and ministry.

Elijah’s presence there is the result of the Lord’s command, both to him and to her. We see God’s initiative and direction of all things, even from the beginning of the chapter. The Lord sent Elijah from the wilderness, where morning and evening, ravens brought him bread and meat beside the brook Cherith. (1 Kings 17:1-7)

Elijah wasnt starving in the wilderness, even in times of famine. The Lord provided for his prophet. But the widow of Zarephath was down to her last bit of oil and flour, expecting one more meal before she would see her son die of starvation before her very eyes. God sent Elijah to provide for her, for them. Day by day, by way of a rather constant and mundane miracle, the Lord grants them daily bread to supply their needs. (1 Kings 17:8-16)

This woman is given the title “The Mistress of The House.” Reflecting on this passage during this week, the fact we never learn her name struck me. We know this woman only by her circumstances, her office, her vocation and calling in life. We see her work, in response to God’s command even in a Gentile land. The woman is called simply the widow, the mother, the mistress of the house. So we must consider her in light of her vocations. God reveals her to us in no other way.

Many Lutheran congregations pause for LWML Sunday in October. We recognize the Lutheran Women’s Missionary League, honoring the sacred work accomplished by many women of faith. Their names may be unknown to us, but their prayers, mites, and care support the ministry of Church workers in outreach to those in spiritual and physical need. God knows they continually supported and encouraged me, during my seminary education, throughout my missionary service to the Umohon (Omaha) Tribe of Nebraska, and in my pastoral ministry at congregations.

You may not know their names, but likely the results of their faithful, humble work has been going on all around you. I don’t know all of them either. They are not in it for personal fame or glory, but through faith and in glad response to the Word of the Lord. Freely they received God’s gifts. Freely they give and employ them for the benefit of those He sends to preach and teach–and all those who hear, are Baptized, communed, and blessed according to Christ’s command.

17 After this the son of the woman, the mistress of the house, became ill. And his illness was so severe that there was no breath left in him. 18 And she said to Elijah, “What have you against me, O man of God? You have come to me to bring my sin to remembrance and to cause the death of my son!”

19 And he said to her, “Give me your son.” And he took him from her arms and carried him up into the upper chamber where he lodged, and laid him on his own bed. 20 And he cried to the Lord, “O Lord my God, have you brought calamity even upon the widow with whom I sojourn, by killing her son?” 21 Then he stretched himself upon the child three times and cried to the Lord, “O Lord my God, let this child’s life come into him again.” 22 And the Lord listened to the voice of Elijah. And the life of the child came into him again, and he revived.

23 And Elijah took the child and brought him down from the upper chamber into the house and delivered him to his mother. And Elijah said, “See, your son lives.” 24 And the woman said to Elijah, “Now I know that you are a man of God, and that the word of the Lord in your mouth is truth.”