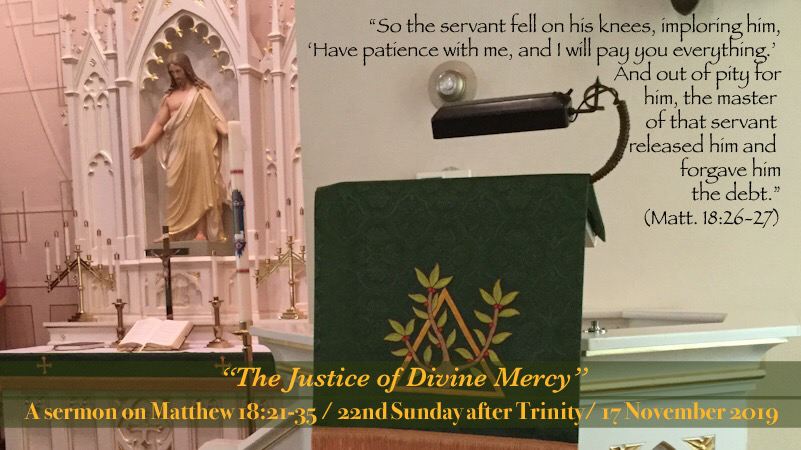 The Justice of Divine Mercy

Jesus teaches us to pray, “Forgive us our trespasses, as we forgive those who trespass against us.” Here the Lord speaks of the gracious generosity and merciful readiness with which we are to forgive others. He warns of serious spiritual consequence should we refuse to forgive them “from your heart.”

But what if the heart feels no forgiveness for that brother or sister in Christ…?  Such a heart must be filled again with the King’s gift of mercy given for you in Jesus.

Hear the full audio of “The Justice of Divine Mercy“

The Parable of the Unforgiving Servant

21 Then Peter came up and said to him, “Lord, how often will my brother sin against me, and I forgive him? As many as seven times?” 22 Jesus said to him, “I do not say to you seven times, but seventy-seven times.

23 “Therefore the kingdom of heaven may be compared to a king who wished to settle accounts with his servants. 24 When he began to settle, one was brought to him who owed him ten thousand talents. 25 And since he could not pay, his master ordered him to be sold, with his wife and children and all that he had, and payment to be made. 26 So the servant fell on his knees, imploring him, ‘Have patience with me, and I will pay you everything.’ 27 And out of pity for him, the master of that servant released him and forgave him the debt. 28 But when that same servant went out, he found one of his fellow servants who owed him a hundred denarii, and seizing him, he began to choke him, saying, ‘Pay what you owe.’ 29 So his fellow servant fell down and pleaded with him, ‘Have patience with me, and I will pay you.’ 30 He refused and went and put him in prison until he should pay the debt. 31 When his fellow servants saw what had taken place, they were greatly distressed, and they went and reported to their master all that had taken place. 32 Then his master summoned him and said to him, ‘You wicked servant! I forgave you all that debt because you pleaded with me. 33 And should not you have had mercy on your fellow servant, as I had mercy on you?’ 34 And in anger his master delivered him to the jailers, until he should pay all his debt. 35 So also my heavenly Father will do to every one of you, if you do not forgive your brother from your heart.”