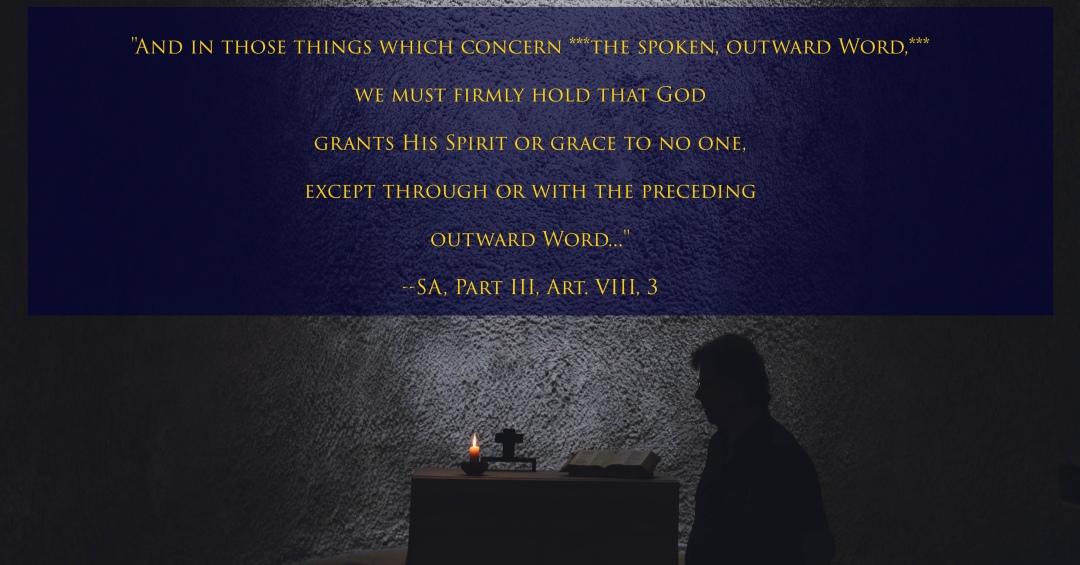 Immanuel Lutheran Church invites parents of confirmation age children to learn and grow with their kids in the Christian faith. To encourage that continual learning and growth, each week of class we post a reading from the Large Catechism or other portions of our Lutheran Confession of the faith here especially for the mothers and fathers. These readings are directly connected to the same portions of the Small Catechism your children will be learning and studying for class. Grandparents, aunts, uncles, cousins, siblings and all members of the Body of Christ are warmly invited to learn along with us. Enjoy, and if you have questions (we ALL do), enter a public comment below or contact Pastor personally and privately at the connect link above. You may also find and add me on Twitter or Facebook/Messenger @isaiah504blues

This week, our young ones are wrapping up their study of Confession & Absolution / The Office of the Keys in the Small Catechism.

For the parents and other interested learners, here is a related reading from the Smalcald Articles

1] Since Absolution or the Power of the Keys is also an aid and consolation against sin and a bad conscience, ordained by Christ [Himself] in the Gospel, Confession or Absolution ought by no means to be abolished in the Church, especially on account of [tender and] timid consciences and on account of the untrained [and capricious] young people, in order that they may be examined, and instructed in the Christian doctrine.

2] But the enumeration of sins ought to be free to every one, as to what he wishes to enumerate or not to enumerate. For as long as we are in the flesh, we shall not lie when we say: “I am a poor man [I acknowledge that I am a miserable sinner], full of sin.” Rom. 7:23: I see another law in my members, etc. For since private absolution originates in the Office of the Keys, it should not be despised [neglected], but greatly and highly esteemed [of the greatest worth], as [also] all other offices of the Christian Church.

3] And in those things which concern the spoken, outward Word, we must firmly hold that God grants His Spirit or grace to no one, except through or with the preceding outward Word, in order that we may [thus] be protected against the enthusiasts, i.e., spirits who boast that they have the Spirit without and before the Word, and accordingly judge Scripture or the spoken Word, and explain and stretch it at their pleasure, as Muenzer did, and many still do at the present day, who wish to be acute judges between the Spirit and the letter, and yet know not what they say or declare. 4] For [indeed] the Papacy also is nothing but sheer enthusiasm, by which the Pope boasts that all rights exist in the shrine of his heart, and whatever he decides and commands with [in] his church is spirit and right, even though it is above and contrary to Scripture and the spoken Word. 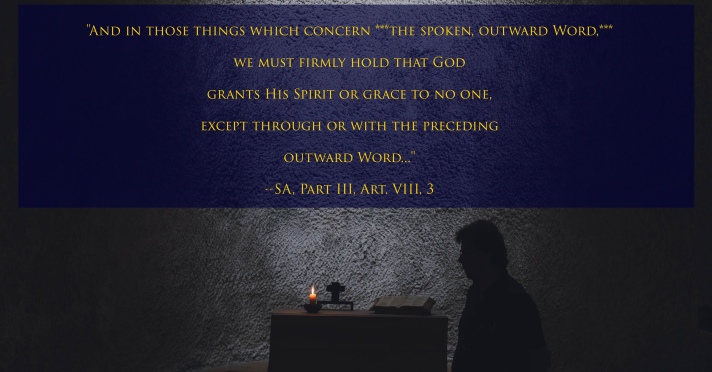 5] All this is the old devil and old serpent, who also converted Adam and Eve into enthusiasts, and led them from the outward Word of God to spiritualizing and self-conceit, and nevertheless he accomplished this through other outward words. 6] Just as also our enthusiasts [at the present day] condemn the outward Word, and nevertheless they themselves are not silent, but they fill the world with their pratings and writings, as though, indeed, the Spirit could not come through the writings and spoken word of the apostles, but [first] through their writings and words he must come. Why [then] do not they also omit their own sermons and writings, until the Spirit Himself come to men, without their writings and before them, as they boast that He has come into them without the preaching of the Scriptures? But of these matters there is not time now to dispute at greater length; we have elsewhere sufficiently urged this subject.

7] For even those who believe before Baptism, or become believing in Baptism, believe through the preceding outward Word, as the adults, who have come to reason, must first have heard: He that believeth and is baptized shall be saved, even though they are at first unbelieving, and receive the Spirit and Baptism ten years afterwards. 8] Cornelius, Acts 10:1ff , had heard long before among the Jews of the coming Messiah, through whom he was righteous before God, and in such faith his prayers and alms were acceptable to God (as Luke calls him devout and God-fearing), and without such preceding Word and hearing could not have believed or been righteous. But St. Peter had to reveal to him that the Messiah (in whom, as one that was to come, he had hitherto believed) now had come, lest his faith concerning the coming Messiah hold him captive among the hardened and unbelieving Jews, but know that he was now to be saved by the present Messiah, and must not, with the [rabble of the] Jews deny nor persecute Him.

9] In a word, enthusiasm inheres in Adam and his children from the beginning [from the first fall] to the end of the world, [its poison] having been implanted and infused into them by the old dragon, and is the origin, power [life], and strength of all heresy, especially of that of the Papacy and Mahome[d]. 10] Therefore we ought and must constantly maintain this point, that God does not wish to deal with us otherwise than through the spoken Word and the Sacraments. 11] It is the devil himself whatsoever is extolled as Spirit without the Word and Sacraments. For God wished to appear even to Moses through the burning bush and spoken Word; and no prophet neither Elijah nor Elisha, received the Spirit without the Ten Commandments [or spoken Word]. 12] Neither was John the Baptist conceived without the preceding word of Gabriel, nor did he leap in his mother’s womb without the voice of Mary. 13] And Peter says, 2 Pet. 1:21: The prophecy came not by the will of man; but holy men of God spake as they were moved by the Holy Ghost. Without the outward Word, however, they were not holy, much less would the Holy Ghost have moved them to speak when they still were unholy [or profane]; for they were holy, says he, since the Holy Ghost spake through them.