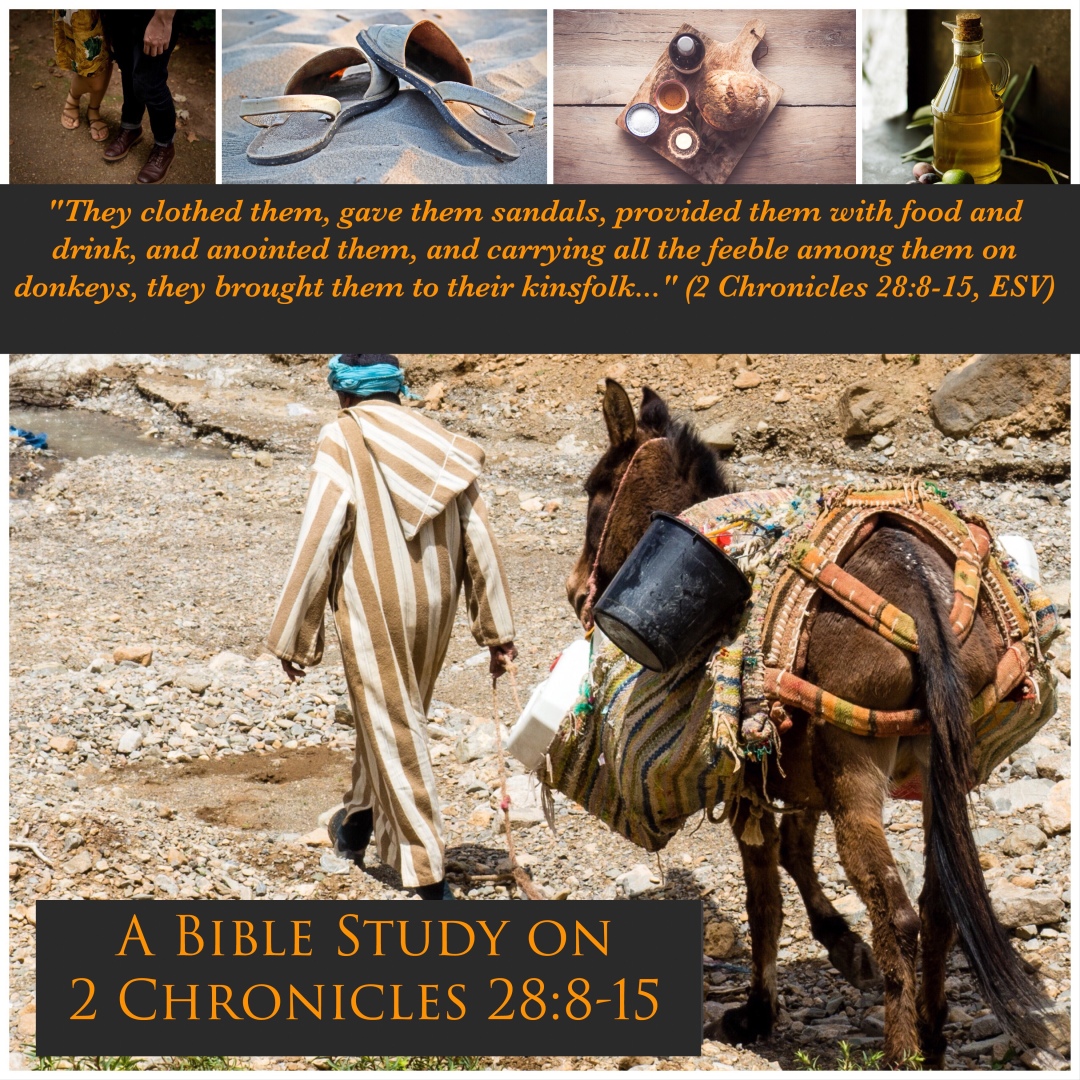 Enjoy this “As-is.” I didn’t have quite the time for fleshing all this out, due to some difficult life events for aging and ailing family members. Still, here’s the discussion and study guide we used in class last Sunday. I’ll try to update verse links or add comments if time allows this week. No promises…except the ones Christ makes to restore His wounded people and provide for all their need, here in time and there in eternity! –JPW

A Bible Study Guide on

Part One: Two Kingdoms, Under God, Quite Divisible…

8 The men of Israel took captive 200,000 of their relatives, women, sons, and daughters. They also took much spoil from them and brought the spoil to Samaria.

A. Historical Synopsis: God’s people wanted a king, like the other nations around them. They got Saul (1 Samuel), then David (2 Samuel), then Solomon (1 Kings 1-11). After Solomon’s death, the Kingdom was divided into two nations (1 Kings 12), between two of Solomon’s sons: Jeroboam and Rehoboam. Other kings followed

9 But a prophet of the Lord was there, whose name was Oded, and he went out to meet the army that came to Samaria and said to them, “Behold, because the Lord, the God of your fathers, was angry with Judah, he gave them into your hand, but you have killed them in a rage that has reached up to heaven. 10 And now you intend to subjugate the people of Judah and Jerusalem, male and female, as your slaves. Have you not sins of your own against the Lord your God? 11 Now hear me, and send back the captives from your relatives whom you have taken, for the fierce wrath of the Lord is upon you.”

E. What had the NORTHERN KINGDOM done to the SOUTHERN KINGDOM, according to v. 2 Chronicles 28:8-10?

F. What was the name of the prophet who intervened?

G. What did the Lord’s prophet command the NORTHERN KINGDOM forces to do?

Note the helpful chart graphic below: The reigns of individual kings in both the NORTHERN KINGDOM of Israel and the SOUTHERN KINGDOM of Judah did not exactly parallel as neatly as the chat below might lead one to think. At a glance, our eye presumes that names next to one another must’ve reigned at the same time. There was overlap. For example, locate Joash in the left hand column near the center. He reigned for 40 years in Judah. The king listed to his left, Ahab, ruled the northern kingdom of Israel for only 22 years.

Part Two: The Lord’s Messenger Does Not Stand Alone This Day

A. The prophet has spoken. How did the NORTHERN KINGDOM leaders respond? Read 2 Chronicles 28:12-13

12 Certain chiefs also of the men of Ephraim, Azariah the son of Johanan, Berechiah the son of Meshillemoth, Jehizkiah the son of Shallum, and Amasa the son of Hadlai, stood up against those who were coming from the war 13 and said to them, “You shall not bring the captives in here, for you propose to bring upon us guilt against the Lord in addition to our present sins and guilt. For our guilt is already great, and there is fierce wrath against Israel.”

B. Verse 12 indicates only four men “stood up against those who were coming from war” (v.12). What responsibility was given to these men, such that these four were enough to turn the tide?

C. What words show they believed the prophet and had made his message their own? (Notice how they quote the prophet’s sermon)

Note: Often in Scripture it only takes a few people of faith and conscience willing to stand up. Can you think of any other times few stood to call “sin” by name and lead God’s people by Word and example into repentance?

Part Three: The “Prophet of the Lord” as a TYPE of Christ Jesus

14 So the armed men left the captives and the spoil before the princes and all the assembly. 15 And the men who have been mentioned by name rose and took the captives, and with the spoil they clothed all who were naked among them. They clothed them, gave them sandals, provided them with food and drink, and anointed them, and carrying all the feeble among them on donkeys, they brought them to their kinsfolk at Jericho, the city of palm trees. Then they returned to Samaria.

E. How has Christ acted as a greater fulfillment of Oded?

H. How does the Church “go and do likewise” in Word and deed?