Memes are meant to stick in our minds. Little snapshot slogans on social media tend to stay with us, sometimes longer than they should. Some are religious, others political, humorous or sweet. Juxtaposed images and text can leave an impression, for better or worse.

Over this volatile election season, I saw some with the slogan “Eat the rich.“ Such words were not superimposed over a thick, juicy steak or luxurious looking chocolates. It’s an angry phrase, spoken against the wealthy. Some call “them” the 1% or the 3% or whatever percentage of persons is portrayed in possession of an ungodly wealth.

“Eat the Rich is an abbreviation of a saying attributed to Jean-Jacques Rousseau: When the people shall have nothing more to eat, they will eat the rich,” according to Wikipedia. The French Revolution saw angry mobs of men crying, “Off with their heads” as the aristocracy fell to the guillotine, in bloody revolt and a revenge executed against the privileged “haves” by the suffering “have-nots.” Even today, calls for justice inflame crowds to destroy the property and livelihoods, even entire neighborhoods of others in the name of standing up for the disadvantaged poor. 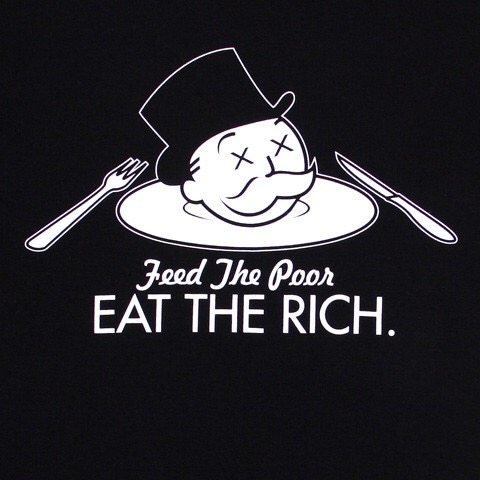 Inequity and greed abound in this fallen world, an undeniable truth. Some seem to obtain their great wealth by fraudulent, criminal means. Others thrive at the unethical and unjust expense of their neighbors. God would not have us take financial advantage of our neighbor. No Christian is freed to ignore the poor or despise our neighbors in need. Though some seek to hide them from view, God’s Commandments stand as etched in the most greedy stone heart: “You shall not covet” and “You shall not steal.”

Never, however, are Christians given license to hate anyone, not even the wealthy. Our divine mandate to love our neighbors always includes helping the poor, but never excludes the rich as persons beyond the reach of God’s own grace or our equally authentic Christ-like love. Jesus loves and saves wealthy people, too. Christians are not instructed or allowed to check anyone’s account balance before deciding whether that neighbor is rich or poor enough for our love, not even to see whether they’ve tithed.

Zacchaeus is a fine case in point, but he’s not the only wealthy person Christ calls to faith. Jesus causes great offense to many a wannabe social-justice warrior in this passage, even in his own time. Some in the crowd kindled hot, hateful thoughts or angry accusations that Jesus was showing favoritism and failed to condemn that man’s unfair business practices with fervor and fury enough.

The passage identifies Zacchaeus as “a chief tax collector” with great wealth. Likely other tax collectors reported to him; he grew rich while they taxed the poor. As a Jewish man, Zacchaeus would have been marked as politically corrupt, a traitor to his own people. He was an agent of the Roman government. His great wealth only accumulated while the threat of Roman law–including the force of occupying Roman soldiers–stood behind Zacchaeus’s every demand for tax monies. Some of it stayed there in his pockets. His hands were dirty with the filth of wealth that served their Roman oppressors.

Many despised this powerful little man, and felt fully justified in so doing. “They all grumbled” when Jesus refused to join them as they reviled him. So they added Jesus’s own name to their “deplorable” list. Covetous crowds complained, “He has gone in to be the guest of a man who is a sinner.”

The portrait of Jesus as a social-or socialist-revolutionary is often held up to our eyes, as though Jesus only ever sides with the poor. Scripture does not support such a political narrative. The people of Jesus’ own time longed for a civil Savior to empower the people oppressed by the Romans and establish an alternative government. In the end, they much preferred a murderous, revolutionary Barabbas to the real Jesus, the true Lamb of God, who takes away the sin of the world.

Even today, many seek an idyllic kingdom of Barabbas more in keeping with their own longing for the violent overthrow of whatever wealthy powers that be. As Jesus explains to Pilate, “My kingdom is not of this world. If my kingdom were of this world, my servants would have been fighting, that I might not be delivered over to the Jews. But my kingdom is not from the world.” (John 18:36) Few preach and seek after the divine reality of this Jesus who “came to seek and to save the lost.” He comes to save them from something far more serious than material poverty.

Joyfully, Jesus proclaims to Zacchaeus, “Today salvation has come to this house,” salvation from sin, death and hell. Even the wealthy enter into it only by faith in this Christ, who has mercy on sinners of all statures. He was called a notorious traitor by those outside his doors. Jesus declares Zacchaeus “also is a son of Abraham,” a genuine heir of God’s kingdom and covenant of grace. This same name He extends to all who believe:

Does he who supplies the Spirit to you and works miracles among you do so by works of the law, or by hearing with faith— just as Abraham “believed God, and it was counted to him as righteousness”? Know then that it is those of faith who are the sons of Abraham. And the Scripture, foreseeing that God would justify the Gentiles by faith, preached the gospel beforehand to Abraham, saying, “In you shall all the nations be blessed.” So then, those who are of faith are blessed along with Abraham, the man of faith. (Galatians 3:5-9)

Zacchaeus is not shown favor or redeemed because of his wealth, neither is he saved because he rids himself of a certain portion. Jesus has mercy on all who have sinned. We could never pay back all we owe to God and others. Yet the love of God revealed to him in Christ Jesus, freely given, moves Zacchaeus to freely give to others in love and thanksgiving.

The people outside his doors might not think differently of him at first. Perhaps they never would. Money can’t satisfy hate any more than it can buy love from God. Only Christ can pay the price, and He did. “For you know the grace of our Lord Jesus Christ, that though he was rich, yet for your sake he became poor, so that you by his poverty might become rich.” (2 Cor 8:9)

http://www.artbible.info/art/last-supper.html
We eat the rich fruits of his cross, feasting on the forgiveness of sins poured out generously for poor sinners. Jesus prepares a table before people like Zacchaeus, in the presence of his enemies. His sacred cup runneth over with pure goodness and mercy sure to follow us all the days of our life. With Zacchaeus, we will dwell in the house of the Lord forever.

Jesus shows Zacchaeus that even he is forgiven, beloved and blessed. Whatever shameful name the crowds might cast upon him, Christ has spoken a better one to Zacchaeus, calling him a “son.” Zacchaeus knows whom to believe. Embracing faith in the name of God’s Son changes everything. It brings an end to his walking in shame and fear of what others must think, might say or do. It brings a courage to love and serve even the most critical, hateful and ungrateful sinners, because Christ died for them, too.

As a true child and heir, Zacchaeus begins to use his managerial means and sanctified skill to serve his neighbors in repentance and faith. He is moved toward a new generosity and willingness to pay even fourfold restitution to those whom he had wronged. He is forgiven, no longer captive of fear and guilt and shame that held him imprisoned in thoughts of “Why bother? What’s the use? It won’t do any good.”

God’s Spirit generously creates in us clean hearts and renews a right spirit within us. We don’t have to measure any person by his wealth or lack of it. It is enough that we learn to regard him as a human being, created and redeemed by the same Lord. “For the anger of man does not produce the righteousness of God.” (James 1:20)

He entered Jericho and was passing through. And behold, there was a man named Zacchaeus. He was a chief tax collector and was rich. And he was seeking to see who Jesus was, but on account of the crowd he could not, because he was small in stature. So he ran on ahead and climbed up into a sycamore tree to see him, for he was about to pass that way. And when Jesus came to the place, he looked up and said to him, “Zacchaeus, hurry and come down, for I must stay at your house today.” So he hurried and came down and received him joyfully. And when they saw it, they all grumbled, “He has gone in to be the guest of a man who is a sinner.” And Zacchaeus stood and said to the Lord, “Behold, Lord, the half of my goods I give to the poor. And if I have defrauded anyone of anything, I restore it fourfold.” And Jesus said to him, “Today salvation has come to this house, since he also is a son of Abraham. For the Son of Man came to seek and to save the lost.”