Readings for the Thirteenth Sunday after Trinity

Which question you bringing this Lord’s Day: “Who is my neighbor?” or “Where’s my Good Samaritan?” 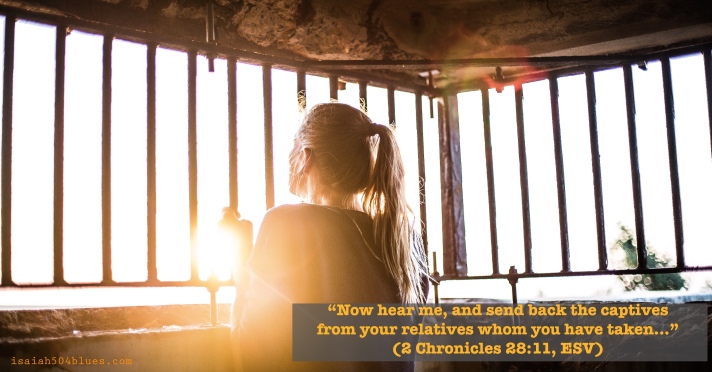 Here are the readings appointed for this coming Thirteenth Sunday after Trinity, 26 August 2018

8 The men of Israel took captive 200,000 of their relatives, women, sons, and daughters. They also took much spoil from them and brought the spoil to Samaria. 9 But a prophet of the Lord was there, whose name was Oded, and he went out to meet the army that came to Samaria and said to them, “Behold, because the Lord, the God of your fathers, was angry with Judah, he gave them into your hand, but you have killed them in a rage that has reached up to heaven. 10 And now you intend to subjugate the people of Judah and Jerusalem, male and female, as your slaves. Have you not sins of your own against the Lord your God? 11 Now hear me, and send back the captives from your relatives whom you have taken, for the fierce wrath of the Lord is upon you.”

12 Certain chiefs also of the men of Ephraim, Azariah the son of Johanan, Berechiah the son of Meshillemoth, Jehizkiah the son of Shallum, and Amasa the son of Hadlai, stood up against those who were coming from the war 13 and said to them, “You shall not bring the captives in here, for you propose to bring upon us guilt against the Lord in addition to our present sins and guilt. For our guilt is already great, and there is fierce wrath against Israel.” 14 So the armed men left the captives and the spoil before the princes and all the assembly. 15 And the men who have been mentioned by name rose and took the captives, and with the spoil they clothed all who were naked among them. They clothed them, gave them sandals, provided them with food and drink, and anointed them, and carrying all the feeble among them on donkeys, they brought them to their kinsfolk at Jericho, the city of palm trees. Then they returned to Samaria.

15 To give a human example, brothers: even with a man-made covenant, no one annuls it or adds to it once it has been ratified. 16 Now the promises were made to Abraham and to his offspring. It does not say, “And to offsprings,” referring to many, but referring to one, “And to your offspring,” who is Christ. 17 This is what I mean: the law, which came 430 years afterward, does not annul a covenant previously ratified by God, so as to make the promise void. 18 For if the inheritance comes by the law, it no longer comes by promise; but God gave it to Abraham by a promise.

19 Why then the law? It was added because of transgressions, until the offspring should come to whom the promise had been made, and it was put in place through angels by an intermediary. 20 Now an intermediary implies more than one, but God is one.

21 Is the law then contrary to the promises of God? Certainly not! For if a law had been given that could give life, then righteousness would indeed be by the law. 22 But the Scripture imprisoned everything under sin, so that the promise by faith in Jesus Christ might be given to those who believe.

29 But he, desiring to justify himself, said to Jesus, “And who is my neighbor?” 30 Jesus replied, “A man was going down from Jerusalem to Jericho, and he fell among robbers, who stripped him and beat him and departed, leaving him half dead. 31 Now by chance a priest was going down that road, and when he saw him he passed by on the other side. 32 So likewise a Levite, when he came to the place and saw him, passed by on the other side. 33 But a Samaritan, as he journeyed, came to where he was, and when he saw him, he had compassion. 34 He went to him and bound up his wounds, pouring on oil and wine. Then he set him on his own animal and brought him to an inn and took care of him. 35 And the next day he took out two denarii and gave them to the innkeeper, saying, ‘Take care of him, and whatever more you spend, I will repay you when I come back.’ 36 Which of these three, do you think, proved to be a neighbor to the man who fell among the robbers?” 37 He said, “The one who showed him mercy.” And Jesus said to him, “You go, and do likewise.”

One thought on “Readings for the Thirteenth Sunday after Trinity”